skip to main | skip to sidebar

see the full screen version at http://www.youtube.com/watch?v=brHT0-sfUo0
Posted by Kyle at 7:58 PM No comments: 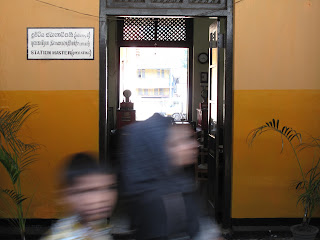 This place isn't like southeast asia - it feels different. Curry particulate tickles the nose and men are plump and shouting. The trains are packed. A standing-room sweat filled rectangular prism chugging through somewhere warm with picture frame windows ever changing. 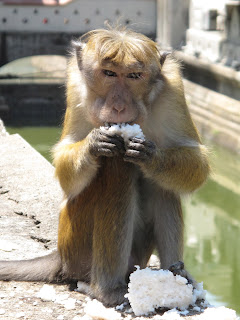 These are the guards of the buddha's tooth. From under the bodhi tree in northern india, it has been passed, smuggled, hammered, bombed, crushed, concealed in hair, diffused, drowned, swept by currents, and re-calcified, according to legend. 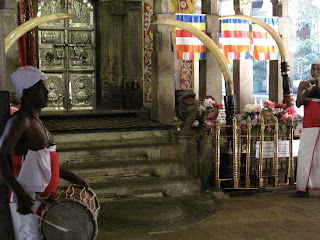 This is not your ordinary worship. This is aggressive spirituality. On just any old Saturday, Buddhists from Sri Lanka and afar ply their way into the upper hall of the Temple of the Tooth in order to get a glimpse, through a monk silhouetted doorway, of the gleaming, gilded tomb, in which the tooth is said to be. 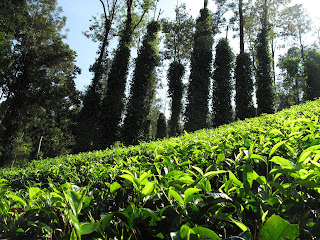 A landscape reimagined - clipped bonsai tree tea plants set fluorescent green fire to the hillsides. Three species are present - tea, tea, and tea. Actually, the tea is interspersed with select leguminous tree species for nitrogen fixing. Upon some of the trees pepper is grown. What was once incredibly biodiverse upland moist forest was systematically cleared for the tea-time fancy of England and other such western crumpet-dipping folk. Sri Lanka has little more than 20% primary forest cover. 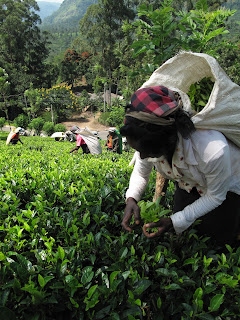 Small Hindi woman dot the hillsides, stooped and swiftly picking newly sprouted leaves, dropping them into the burlap on their back. Their families have often have been working on these plantations for generations. 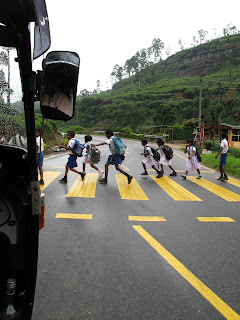 Schools out - tea plantation in all directions. These kids are probably returning to the group housing for them and their parents, who both work on the plantation. 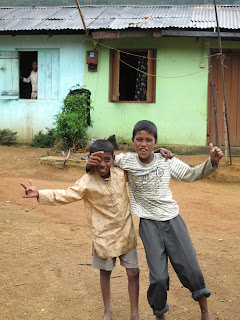 Pointing the way to the nearest anything. 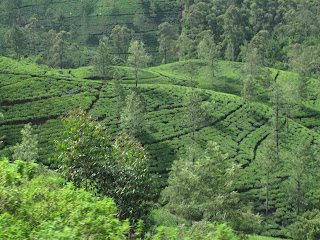 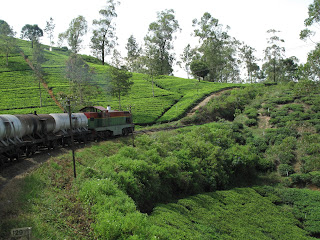 Coming from relatively infrastructure-less French-colonial Laos, the British clearly had a different idea of colonialism. They left an incredibly intact infrastructure of railroads and roads, even university campuses. Rail travel is still quite popular (and cheap) for Sri Lankans today - complete with peanut and fried shrimp vendors roaming the cars and impromptu tambourine and back-of-the-seat percussion 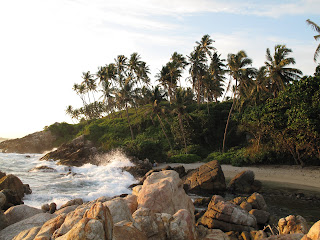 The beaches of the south coast were miraculous. Long stretches of perfectly tilted sand. Palm trees observe, as always, arching their unkept heads to peer onto the towel of a sun-crisped lounger or into the bucket of a returning fisherman. 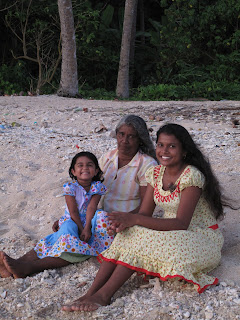 This was the coast of Sri Lanka hit hard by the 2004 Tsunami. Stories of carnage are commonplace. The water receded in the moments leading up to the wave - fisherman ran out to collect flapping, beached, fish. And then the waves came, reaching the second story of some of the beach side houses. These three generations sat watching the sunset on their little patch of beach, around the corner from the surfers and honeymooners. 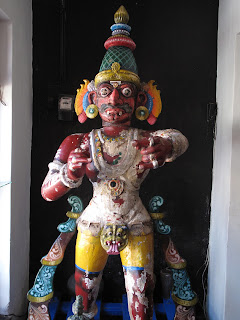 A Hindi god at 6 feet tall 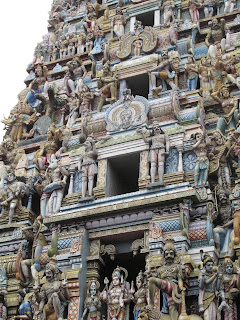 Buddhist, Hindu, and Muslim religions all coexist in this island nation. This is an intricately carved ornamental entrance to a Hindu temple in Columbo.

meters of line to the chicken store....

China happens. Look around. Just look. A transition forest: jungles of cranes and rebar point towards empty skeletons of mostly-finished apartments. Go up - yaks and the elderly. The retirement homes are almost 3 miles into the sky. Moss carpeted forests and alpine lakes - don't swim in them. Don't wash. They are spirit filled lakes, and deep too.


Destined for a hard wall - this major tributary to the Yangtze froths chocolate through Tiger Leaping Gorge - on its way to the largest capacity dam in the world - Three Gorges. Some of this water, circulated to the bottom of the reservoir, will help embalm villages and ancient pagodas, long covered over by a thirst for illumination and toaster ovens.

Thickest walls - smallest windows - shafts of light have to force themselves into these traditional Tibetan abodes. The people aren't much different - they aren't warm and bubbly - the father wears a large traditional sword and knows how to tie a pig to a horse. How else do you bring your pigs to summer pasture? Courtyard out front for chickens, dogs, horses, etc. Storage for crops, wheat, drying meat, rusting equipment. Window detail is bliss.


These people are centered around yak - yak milk, yak cheese, yak butter tea, yak meat. A man is measured by how many yaks his family keeps. Recently, in a perverse twist of the utter, yak meat has become too expensive to eat - it fetches such a price at the market a days walk away, that it is rarely consumed by the local Tibetan herdsman. Its butter tea and porridge for the summer.

Old Tibetan men and woman still living in the village are sent each summer to care for the yaks in the high summer pasture. They corral the baby yaks into the shed to protect them during the night, and lure the mother yaks close in the morning in order to milk them. The grandpa we were staying with was sick - his wound from being kicked in the side many years ago by a mother yak was acting up - it was the winds, he told us.

Woman from a nearby town climb this mountain on the edge of Dali lake to pay homage to the spirits in the pagoda - they cook, pray, and chat.

The expanding froth of synthetic white bubbles is in obvious contradiction to the grimy angular tiling in this sorry excuse for a bathroom. It grows, a fractal of hygiene, erupting like a middle school baking soda volcano from a teal PVC abyss. I guess Laos’ wet season gets you quickly accustomed to wetness after a long hot dry season of general desiccation – dank bathroom stalls, mold and bacteria now colonizing the seams of a cheap tile job, just inches from your body’s own bacteria-rich seams.

So this scouring, not of an innocent landlocked tropical carpet by geopolitical resource vacuums, but of a rather unassuming smallish bathroom stall by hordes of expanding soap bubbles, was not at all unwelcome.  Cleanliness is all relative here – there is only a certain level of sterility that can be attained when one lives on a bamboo and thatch structure above molasses mud of the Mekong and a host of various domesticated (and not so domesticated) animals. And politically as well, clean is rarely any easier. A project or mandate not tarnished by streaks of greed and corruption is unheard of in these forests and hills.

And in my current Saturday eve stupor catalyzed by sticky rice and beer Laos, although wary of colonization of any sort, I silently dare these waxing half moons of increasingly incandescent bubbles to do the job that the tired Lao woman had failed to complete the night before, at this particular watering hole, in this particular capital city – if you could call it such.  Simultaneously, as my mind’s eye pans from gazing down to all around, I ask those invisible orbs that contain the force necessary to ensure that local people have a say over the future of their land and livelihoods, those bubbles that travel only along strands of shared understanding and experience, to one-day expunge the back door mining concessions and illegal logging roads from this country’s collective tiling.
Posted by Kyle at 3:08 AM 1 comment:

siphandone: fish are people too

Siphandone: 4000 islands, it means. A place in which the fate of people and fish are inextricably tied. So, in lieu of actually strapping a person to a fish, we spent a week on a small and remote island with the intention of burdening an already exhausted krempf's catfish, in the middle of its migration upstream, with a bulky piece of technology - an extension of humanity's long arm... or antennae.

The tag, which records light levels and electromagnetic field, will transmit data to a satellite once it detaches from the fish and allow us to track the migration route and pace of these long distance migrants. While the Mekong harbors a number of migratory fish - little is known about the migration routes. This information is critical to predict the impacts of the 11 potential main-stem Mekong hydropower dams that are being planned.

Find out more about the project by watching this video (embedded near the middle of the web-page) that I filmed and produced: An Upstream Journey: Tagging migratory fish of the Mekong river


Dear friends.... it has been a while, I know. If you're still out there, check out my latest (and first) cinematic production. Explosives, big fish, rapids.... its got it all. Photos from this trip and China to come.

Wendell and the language of globalized capitalism

Wendell Berry, an American literary icon, scholar, farmer, just weeks ago gave the prestigious Jefferson Lecture sponsored by the National Endowment for the Humanities. His words, which resonate in a place inside of those that recall forays into the dirt and the water, are a timely mirror in which to reflect on the state of our environment and the shift in resource valuation in our age of globalized capitalism.

Over the recent past, it has become imperative for the environmental and conservation movement to address the issue of value.  What is the value, say, in the services that the upstream watershed provides? What is the value of a carbon-dioxide breathing, oxygen emitting forest?  How much are the persistent pollination services of bees and butterflies worth to us? These may seem like abstract or cosmic questions  – but more and more, these are requiring empirical answers. And furthermore, these answers are guiding management decisions.

In a world connected by countless invisible digital strands from the densest cities to the remotest villages, we have been forced to adopt a universal language out of convenience, a way in which to represent things and concepts that can be freely translated and intercompared.  This language is economics – the almighty dollar.

Societies have forever used specific languages to express feelings and emotions, to convey thoughts, to record history, to trade and interact. Isolated groups had certain ways of saying things, conveying meaning, and codifying symbols that were attuned to their specific ways of life. Interacting or trading with communities speaking other languages required a common denominator.  Today, our global common denominator is ‘the market’. Wendell is troubled, as we all should be, when ‘the market’ “assumes the standing of ultimate power”.

The resources that once may have been protected by local community based values, by intrinsic worth and local memories, are now susceptible to evaluation based on transnational economic costs and benefits.  What was once a small forest on the edge of some rice fields holding the spirits of the ancestors is now worth a certain amount of dollars in carbon credits, or in potential rice growing profits. But there is no market price for ancestral spirit homes.

In essence, we have a translation problem. We are watering our valuations of certain resources down to a basic unit that fails to capture the complexity and the nuance of human value. “Actual value of some things”, Wendell remarks, “exceeds human ability to calculate or measure, and therefore must be considered absolute”.

So can society come up with a better way in which to value what our economy is rooted in?  It may not be possible for the peoples of the world to come to an agreement on what should be valued and for how much. But it seems that we have settled; we have adopted the most simplistic way to compare a finished product to the raw part of an ecosystem that it once played a part in. 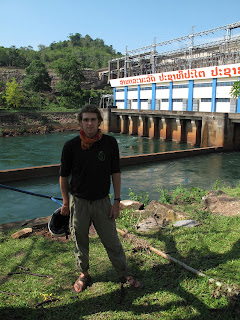 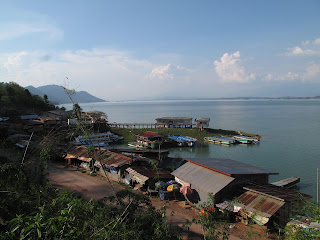 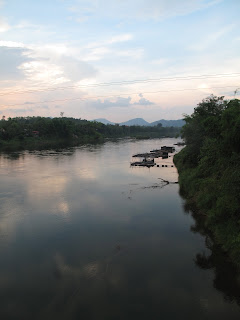 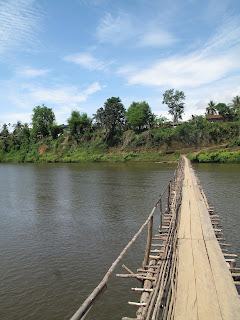 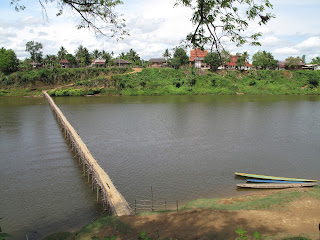 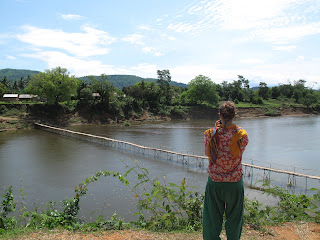 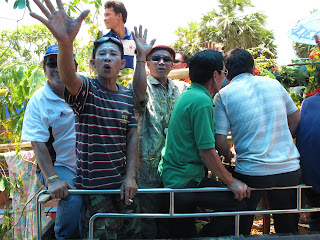 Kyle
Supported by a year-long Princeton in Asia fellowship, I am working for the World Wildlife Fund's Greater Mekong office based in Vientiane, Laos. Although devoid of a rumen and associated intestinal infrastructure, I plan to ruminate on the goings-on of life on this side of the world.